The first chocolate shop we enter engulfs us in the scent of creamy cocoa and sea salt; waves in an ocean of sweet cocoa crash around us. Bright colors and lights instantly lift our moods, even before we lay our eyes on the rows of chocolates.

Gradients range from the white chocolates to the milks and on to the darks. Set apart only by their percentage of cocoa, they are united by their unique flavors and magnificent taste. The chocolatiers have perfected the art of flavoring these delicate pieces; there are classics with nuts and fruit, and there are more adventurous combinations infused with chili powder, lavender or champagne.

“Alright guys,” our young tour guide begins. “Are you ready to try your first chocolate sample?”

Are you kidding? I was born ready. This is the moment I have been waiting for. All of my life has led to this one moment. Bring on the chocolate!

“Yes,” I murmur quietly, along with the other five members of our group of students spending six weeks in Europe.

Debra – our petite tour guide from Brazil, living here in Brussels to study at the university – offers six bars of chocolate on a silver platter for us to sample. Unlike the three “artisan” stores we will visit later today, these chocolates are manufactured and thus, are nothing short of perfection.

The tour consists of six stores, all located around Brussels. It begins with the sweetest chocolates, those with the lowest cocoa percentages, and ends with the darkest, most bitter chocolates, containing the highest levels of cocoa.

Here in Léonidas we are offered a white chocolate praline, filled with a caramel shell and nougat center. My mouth fills with flavors, but due to the high level of sweetness and low level of cocoa, the flavors do not linger long. By the time we walk to the next store, located right across the street, the remnants of flavor are completely gone.

Neuhaus, the “home of the praline,” will become my favorite of the six stores. Here, the famous Belgium praline was invented. This store, now a chocolate shop, was once a pharmacy where John Neuhaus I ran a successful business selling medicine.

His claim to fame? He coated his pills in chocolate to get rid of the bad taste. That’s some medicine I wouldn’t mind taking — daily dose of chocolate, anyone?

Finally, John’s grandson, John Neuhaus III, decided to get rid of the medicine and simply sell chocolates with a thick coating outside and delicious nougat inside; thus, the praline was born. Something interesting about John III, however, was that he had a little crush on the French actress, Brigitte Bardot. He would watch her movies and anytime she spoke seductively, he would name a chocolate based on her script. Today you can find chocolates called passion, seduction and more, all shaped to resemble the bountiful breasts of Bardot. Talk about infatuation.

A WOMAN WITH A DREAM

Our third stop, only steps away, is called Mary. Mary Delluc was a fearless woman who gave everything she had to establish herself as a famous chocolatier, a trendsetter way ahead of her time.

Not only was Mary talented in the crafting of chocolate, but she was also extremely wise. Mary established her shop on a street known as “Rue Royale,” the same street that King Leopold II would walk down every day. In 1942, she was awarded the title “Certified Royal Warrant Holder of Belgium” and became the sole supplier of chocolate to the royal family.

The most interesting part of Mary’s shop was her guestbook. Mary kept a listing of all her regular customers and the types of flavors that they preferred. She would use this book in her laboratory to design specific chocolates for each customer, going so far as to name each of them after their inspiration. 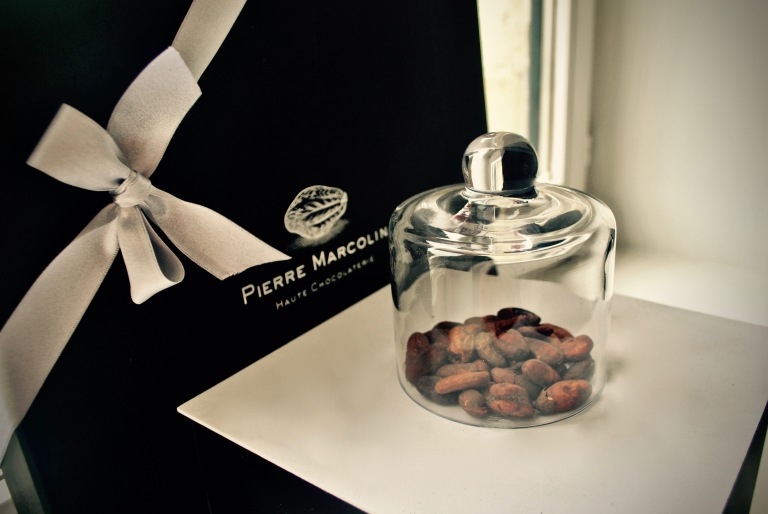 Today, there are chocolates for the current royal family named after the king, queen and prince. Only now do I understand my desire to marry royal — custom made chocolates.

SIMPLICITY, EXTRAVAGENCE AND EVERYTHING IN BETWEEN

To reach the last three artisans stores, we take a short walk downtown. We first enter a small, dark-lit store named after its chocolatier, Frederic Blondeel. These chocolates, perhaps the most interesting, were simply marketed but exquisite in flavor. There were rose, black current, pistachio and chili-infused bars. Flavors that you could never have imagined were presented in a beautiful assortment and the humility of it all only makes the chocolate that much more amazing.

If Blondeel’s approach to chocolate is humble, Pierre Marcolini’s is just the opposite. The outside of his three-story shop is adorned in clouds of pink flowers and decorated windows. The inside is just as elaborate with long stations of chocolate, bright lights, bars of macarons, more flowers and colorful centerpieces.

Despite the overwhelming atmosphere, the chocolate can best be described as unpretentious and modest. Marcolini recognizes that the origin and harvesting style of each cocoa bean can completely alter the bean’s flavor.

We were offered two chocolates to try, one from Madagascar, the other from Venezuela. Once we ate the two, we tried to identify the different flavors added to each one. Turns out, there were no added ingredients and both bars were made the exact same, the two types of beans just tasted that different. One was rich and bold, the other sweet and nutty. Both were equally amazing.

Last, but certainly not least, we attended the most unique shop, Patrick Roger. Roger is a famous chocolate sculptor, with no background in chocolate making or art; Roger is simply a man who found his knack in something he was passionate about.

His store, lit up with green lights, contrasting against all of the dark hues of chocolate, was simple, artistic and intriguing. If you want to see some incredible, and tasty works of art, pick up one of his books and prepare to be amazed.

CHOCOLATE AS IT SHOULD BE

Well, is your mouth watering yet? When we planned our trip to Belgium, the first thing that came to mind was chocolate (well, and waffles, but that’s a story for another time). To get the full experience, we knew we had to take a tour and find out what really made these chocolates so good. The tour blew my expectations through the roof as I learned about the ingredients, the sources, the styles and the art behind it all.

Culture is a combination of the historical, social, physical and linguistic. One of the greatest ways, I believe, to get to know a culture is through its view of food. The Belgians understand the value of pure ingredients and sweet treats, reflecting their purist attitudes and the way they value the “job done right.”

The only thing left to say now is: I will never view a Hershey’s chocolate bar the same way again.

Brooke is a senior at Baylor University studying journalism and business. She loves to explore new coffee shops, express herself through writing and experience the world by hiking through nature. She finds her happiness in exotic flowers, cute mugs, strong candles and good books. View all posts by Brooke Battersby