If I asked to say the first three images that would pop into your head when I said the word “Greece” what would you picture?

I don’t know if it’s the art major in me or the hundreds of travel websites my roommates
and I visited to book our flights to Santorini for a free travel weekend – but my first image will always be the spectacular array of white and blue buildings. This unique architectural pattern isn’t seen anywhere else in the world, but I can’t help but think,

why blue and white? 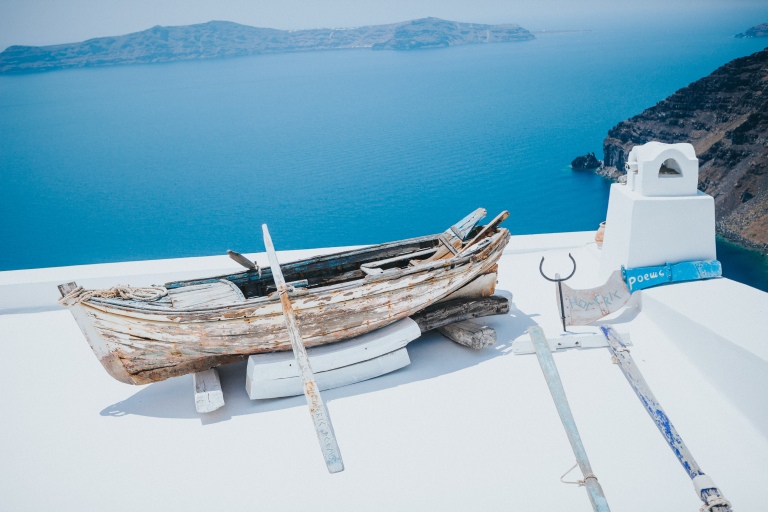 Beginners research resulted in multiple folk tales and stories of patriotism as well as my first assumption of the connection to the infamous blue and white national flag. Government certainly played a role in keeping the tradition of this color coordination but the actual origins of the colors came from innovations of island architecture.

With a scarcity of wooden materials, the majority of the buildings on the islands were constructed out of dark, volcanic stone. Although a great insulator the color of the stone absorbed the heat making a hot day unbearable. They found painting the buildings white to reflect the harsh sunlight was a practical way to stay cool. However, being located in the middle of the ocean gave lack to many resources, especially paint, so the stone walls were covered with a layer of plaster made out of limestone (calcium carbonate).

Blue was the easiest color to default to because of the tinted cleaning agent called “loulaki”, used for washing clothes. This reacted with the limestone plaster and when a few tablets were dropped into it which dyed the solution blue. The original limestone plaster painted over the stone was extremely bright and so was tinted with blue to tone it down (though it still looked white to the human eye).  More blue was added to the plaster to achieve the classic bright blue roof color. 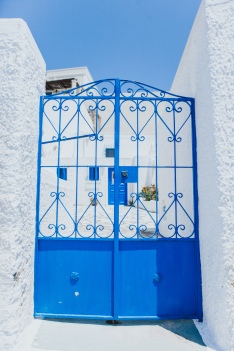 In 1967, military power in Greece, thought that the blue and white showed unification, and supported their political agenda. This government mandated that all buildings must be repainted in blue and white if they weren’t already. Quickly this became the trademark of the islands and lead to a massive jump in tourism. In 1974 it was the official law that all Greek island houses be painted blue and white.

Political agenda or not, many can’t disagree that the aesthetic of the colors against the high-rising mountains and ocean blues does make this particular island one come off as one of the dreamiest places in the world. As a recent tourist of the destination I can assure you; it’s as dreamy as it looks.

Studio Art major passionate about photography and graphic design but most importantly working with others to create exceptional work. View all posts by Sarah Berlinsky